With ApeCoin [APE] at $5, will buyers finally turn up this week

by cryptonewstrending_bgpqv5
in Market And Analysis
0


Disclaimer: The findings of the following analysis are the sole opinions of the writer and should not be considered investment advice.

ApeCoin [APE] reached the $5 support level yet again after it failed to defend the $5.5-$5.3 zone from a bearish onslaught over the past week. From mid-September, the price has posted losses on the chart. The USDT Dominance metric has been on an uptrend since mid-September. Investors and traders have been willing to hold more of Tether than other crypto-assets over the past three weeks, a fact seen by the selling pressure on Bitcoin and the rest of the market in recent weeks.

Bulls expected to bid in these three support zones 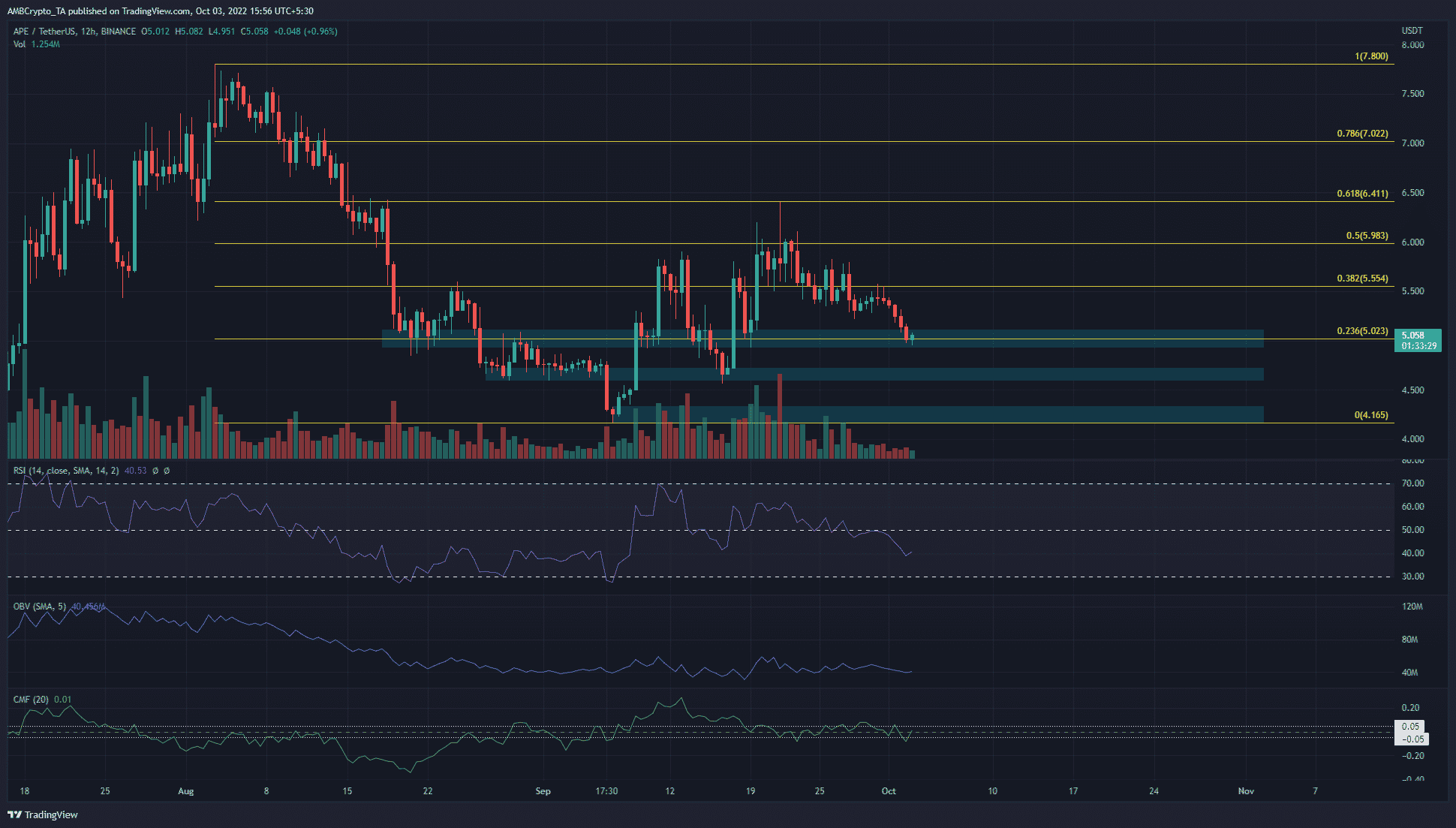 Three zones of support were identified for ApeCoin. From mid-August, the $5, $4.65 and $4.15 zones have been areas that have acted as a zone where buyers have shown some strength. At the time of writing, the market structure of APE was bearish.

The shorter term downtrend started when APE flipped the $5.5 region from support to resistance a little over a week ago. This lower timeframe downward move saw the market structure flip to bearish.

In a downtrend, the support zone might not offer a substantial bounce, if it offered one at all. The RSI slipped below neutral 50 and has since retested the same as resistance. Meanwhile, the OBV and the Chaikin Money Flow were flat.

Taken together, the indicators projected bearish momentum over the past few days, but not a significant amount of selling to back that up.

APE supply on exchange up alongside social volume

Social volume spikes did not tell the entire story of the price action. However, these spikes came at or just after a strong move for APE. The supply on exchanges has been somewhat flat since mid-September.

Both the supply and the social volume saw a spike over the weekend and were followed by a near 10% dump for APE.

The selling pressure of the past few days, combined with the bearish structure, meant that buying APE at the $5 psychological support could be a risky endeavour. A tight stop-loss beneath $4.9 can be considered, with take-profit at $5.3 for a scalp trade. More risk-averse traders can wait for a move to $5.3-$5.5 to sell the asset.

What Does a Risk Analysis Say About Tokemak (TOKE) Tuesday? – InvestorsObserver

SPY: When Exactly Will The Everything Bubble Pop End? (SPY)

Cryptocurrency Price Today: Ethereum Climbs Above $1,300 After Days Of Slump

Invest in blockchain technology to reduce compliance cost, others – US firm VX Technologies to businesses

The usefulness of Bitcoin’s rainbow chart

$215M In Ethereum Was Just Transferred Between 2 Wallets – Benzinga