To this day, many people are confused about whether Bitcoin is a currency, an asset like listed shares, or a rare commodity like gold. The cryptocurrency, usually considered the first-ever, began its journey in 2009. Almost 13 years after its launch, there is not much clarity about Bitcoin’s future.

It is being anticipated by many that it may take some more years before things become clear about the future of Bitcoin and the overall cryptocurrency world. Today, let us explore what might become of Bitcoin by 2030. However, we won’t predict the price of Bitcoin, which is so unpredictable that it can change very sharply within a few hours.

Will Bitcoin gain a wider reach, or will there be more sanctions on it?

Bitcoin and its peer virtual currencies like Ether and Dogecoin are yet to be regulated properly in most countries. In the US, there is little clarity over whether the Securities and Exchange Commission (SEC), the Commodity Futures Trading Commission (CFTC), or the Federal Reserve would have the overall regulatory authority over Bitcoin. There are murmurs that powers could be divided between the SEC and the CFTC in such a manner that one regulates bigger assets like Bitcoin and Ether while the other oversees smaller altcoins.

Bitcoin already has a very wide reach. However, its trading as a speculative asset is mostly restricted to exchanges like Coinbase and Binance, which are caught in a tussle with regulators. Once agencies like the SEC in the US and the Australian Securities and Investments Commission (ASIC) in Australia come up with a detailed and clear approach on the regulation of cryptocurrencies, it is possible that mainstream players like bigger stock exchanges might list a few big cryptos.

On the other hand, China, which is the world’s second-biggest economy after the US, has already outlawed Bitcoin. In 2022, the collapse of Terra and the resulting losses sustained by investors renewed the call for other countries to also take stern action against cryptocurrency trading. By 2030, it might become clear whether most countries want to regulate Bitcoin or impose harsher restrictions on it.

One of the most discussed events this year in the cryptocurrency world was the ‘Merge’. With its move to the proof-of-stake model, Ethereum’s blockchain network is said to have become less energy-consuming. Bitcoin, on the other hand, operates as a proof-of-work cryptocurrency, which consumes a lot of electricity to record transactions on the network. However, the Merge event could not add much value to the price of the Ether cryptocurrency, and there has been no change in the overall dominance of Bitcoin.

By 2030, it may become clear if there is any altcoin that can replace Bitcoin from its top spot in the cryptocurrency world. Even though Bitcoin’s share as the No. 1 cryptocurrency has dropped over the past years, it is still as high as 40% of the total market cap of the crypto world. Many also predict that with time, only a few major cryptos like Bitcoin might survive, while smaller ones like meme tokens would vanish. 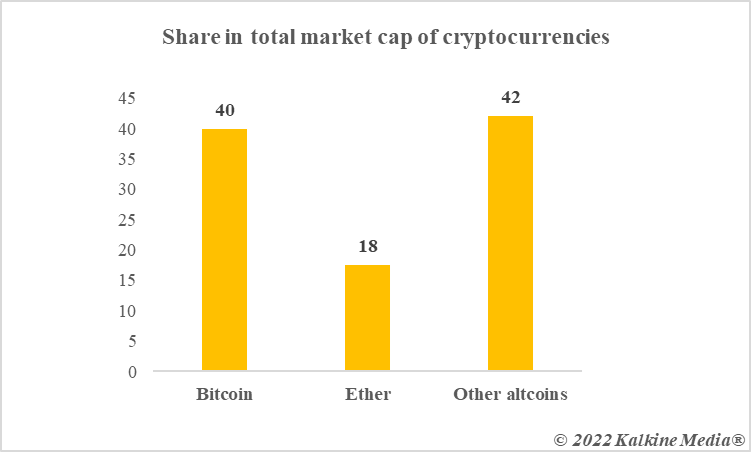 By the end of this decade, a few things like how Bitcoin would be regulated and whether it could become a currency with wider usage in the global payments system might become clear. It was only last year that one country, El Salvador, decided to adopt Bitcoin as legal tender. If in the next few years, Bitcoin fails to attract more takers like El Salvador, it might end up becoming just a speculative asset. There is also a threat from the development of central banks’ own virtual currencies. Lastly, over the next few years, we can also get to know whether Ether or some other asset can become bigger than Bitcoin.

Risk Disclosure: Trading in cryptocurrencies involves high risks including the risk of losing some, or all, of your investment amount, and may not be suitable for all investors. Prices of cryptocurrencies are extremely volatile and may be affected by external factors such as financial, regulatory, or political events. The laws that apply to crypto products (and how a particular crypto product is regulated) may change. Before deciding to trade in financial instrument or cryptocurrencies you should be fully informed of the risks and costs associated with trading in the financial markets, carefully consider your investment objectives, level of experience, and risk appetite, and seek professional advice where needed. Kalkine Media cannot and does not represent or guarantee that any of the information/data available here is accurate, reliable, current, complete or appropriate for your needs. Kalkine Media will not accept liability for any loss or damage as a result of your trading or your reliance on the information shared on this website.

How to Add Value to Real-World Documents With Authentication.

What You Need to Know About Cryptocurrency Scams in the UAE? | Al Rowaad Advocates & Legal Consultants

What Does a Risk Analysis Say About Splintershards (SPS) Friday? – InvestorsObserver