NFTs In A Nutshell: A Weekly Review


Are digital swoosh NFTs really doing numbers for Nike? This week’s reports suggest so. Meanwhile, Solana has a crypto-beer coming out (first time we’ve written that sentence, I suspect) and power player Animoca Brands secured a hefty amount of fundraising for their Japanese division.

That’s just a few major stories that we saw over the past week around all things NFTs. Let’s review.

Nike Tops The Charts For Brand Revenues Via NFTs

“Just do it.” The iconic mantra can only be associated with a sole brand, Nike. This past week, the athletic apparel leader made headlines for being the leader in generating revenues from NFTs. That includes beating out respectable competitors with established, high-paying audiences like Adidas, Dolce & Gabbana, Tiffany, Gucci, and more.

This of course has been spearheaded by Nike’s acquisition of RTFKT, and brought to life by the first release – ‘Cryptokicks’ – back in April. In all, the sneaker brand has collected a substantial $185M from NFT sales. Not bad considering the weight of the bear market this year.

Budweiser was one of the first major companies to show public interest in engaging with NFTs, but they’ll have to sit this one out this week as a new name in NFT beer is in town. This time it’s independent, as Solana-based barrelDAO, a self-proclaimed community-operated brewery, is slated to release a ‘Solana Summer Shandy’ beer.

The canned version of Solana summer will be host to some of the blockchain’s biggest NFT projects too, with projects like DeGods, Okay Bears and more donning the can’s branding.

It feels like Reddit gets mentioned practically once a month for their dialogue on NFTs, and we’re back again this week with more. Last year, we suspected that the social media platform was exploring building an NFT marketplace; by the beginning of 2022, that perspective shifted as reports emerged that Reddit was instead exploring NFT profile pictures. By mid-year, Reddit paired up with Polygon for ‘Collectible Avatars,’ their iteration of NFT engagement.

After seeing some small-scale engagement of the avatars in recent months, releasing them last month; this month, Reddit is airdropping them for free for eligible Reddit users with enough ‘karma’ on the platform. Funny enough, in the midst of the bear market, Reddit has seemingly skewed away from amplifying the idea of NFTs, and is instead leaning in hard to the ‘Collectible Avatars’ name – positioning them as something especially unique and avoiding grabbing on to the idea that ‘anything NFT will stick.’ Seems like a smart approach in today’s market. 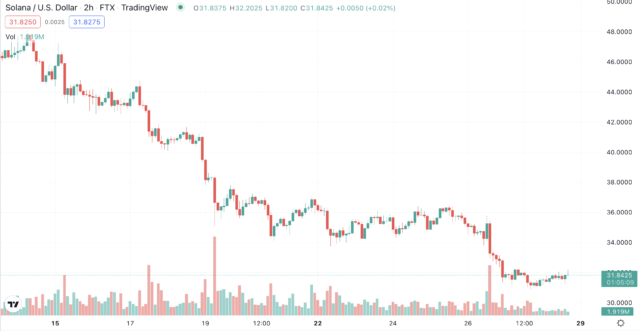 It was a busy week for Bored Ape Yacht Club behemoth Yuga Labs and Ape owners alike. The leading name in NFTs nailed down a number of different deals over the course of the week, including a major brand partnership with legacy candy M&Ms and the BAYC ‘band’ KINGSHIP.

KINGSHIP is signed to UMG and is yet to release any music, but is certainly making some sort of effort with their publicity-focused attempts to secure deals and make moves that can garner some brief attention.

Meanwhile, in anticipation of the MTV Video Music Awards (VMAs), Yuga Labs announced a more formal relationship with hip-hop artists Eminem and Snoop Dogg, sharing that the two would be performing metaverse-inspired collab track “From The D 2 The LBC.”

Both artists have explored NFTs and both are BAYC holders, so it’s no surprise to see a more formal relationship beginning to bud.

Solana Killer Aptos (APT) Surges 27%, Here’s What May Have Caused It

This Week on Crypto Twitter: Did Israeli Regulators Know How Insolvent Celsius Was? And Did Bitboy Really Let Atozy Off the Hook?

3 Tech Stocks With More Potential Than Any Cryptocurrency

How Risky is It Sunday?

Bitcoin and Opting Out of the IMF & World Bank – CoinDesk

Most crypto companies will ‘crash’ after years of industry Ponzi schemes: Palantir co-founder

More crypto companies are going to fall to Ponzi scheme-style bankruptcy, but cryptocurrency will remain a crucial...

Solana Killer Aptos (APT) Surges 27%, Here’s What May Have Caused It

Cryptocurrencies to watch for the week of December 5

Bitcoin and Opting Out of the IMF & World Bank – CoinDesk