by cryptonewstrending_bgpqv5
in Market And Analysis
0 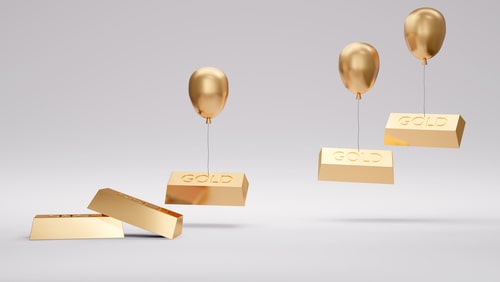 After falling 3% last week, gold was trading near three-week lows Monday as the strong U.S. dollar continued to pressure the metal. But there could also be another reason for gold’s poor price performance, according to Bloomberg Intelligence.

Year-to-date, gold is down 4.3% despite massive inflation concerns, which are still top of mind for central banks worldwide. And one potential explanation could be that the gold market has been looking for deflationary forces to win out in the long term.

“Gold’s poor performance despite the greatest inflation in 40 years may show that the metal, considered a store of value, has been anticipating enduring deflation and is resuming its propensity to outperform most commodities,” Bloomberg Intelligence senior commodity strategist Mike McGlone said in a note Monday.

McGlone added that gold is still early in its recovery against copper and crude oil, with the outlook for the precious metal looking promising.

“Our analysis with wheat shows the metal’s tendency to surpass other commodities,” he noted. “The juxtaposition between the ephemeral wheat-price spike in 1H and the store of value, gold, may play out in the metal’s favor in 2H, with enduring implications. A key economic gauge for 2H may come from whether the gold vs. Bloomberg Commodity Spot Index ratio will recover from a support zone that has held since 2008.”

Gold’s two biggest obstacles in the first half of 2022 have been a strong U.S. dollar and an aggressive Federal Reserve. Yet, the result for gold could be a firm price foundation.

“Gold has appreciated vs. crude oil since the financial crisis, and the trend could be drawing fuel from the relatively discounted levels reached in 1H. The gold-to-crude ratio appears similar to the bottom in 2018, and a primary reason: the paradigm shift of North American oil supply exceeding demand,” McGlone noted.

This year’s spike in energy costs has led to an accelerated rate hike path. And since that increases the chance of a global economic recession, gold could stand to benefit, McGlone pointed out.

“The gold-to-copper price ratio may be in the initial stages in 2H of climbing from an enduring support level,” he said. “That the price of copper and the Nasdaq 100 Stock Index are both down about 20% in 2022 to Aug. 19 may portend the resumption of more enduring deflationary forces and buoy gold.”

Bitcoin is transitioning to a less volatile asset, which only increases its appeal versus gold, McGlone explained. For gold, Bitcoin is its top competitor.

“The world’s most fluid 24/7 trading vehicle, Bitcoin, has gained status in 2022 as a leading indicator and declined in a risk-off environment, but the crypto may be transitioning toward a high-beta version of gold and U.S.Treasury bonds,” he said. “The nascent technology/asset is a top contender to outperform the metal in the long term, as we see it, and is backing up into a good support zone.”

Bitcoin’s volatility is still comparatively high, but broader adoption, such as BlackRock’s partnership with crypto-exchange Coinbase, could help lower Bitcoin’s risk, according to McGlone.

What Does a Risk Analysis Say About Sportcash One (SCONEX) Saturday?

SWIFT considered 'neutral' on sanctions; debate sparked on whether Ethereum is the same

Three Valuable Tokens to Include in Your Portfolio— Solana, Stellar, and Moshnake

DXY Index Reaching New Highs, Crypto Markets Could be in Distress This Weekend

Dogecoin (DOGE) Is On Top Of Whales’ Menu

SINGAPORE -- Thailand and Vietnam have become the top crypto trading hubs among the 10 members of the Association...

Next to Nice: A tale of two Slovenian cryptocurrency sponsorships

Three Valuable Tokens to Include in Your Portfolio— Solana, Stellar, and Moshnake